How it works
Destination Centenarian
I
An increasing number of people are living longer than 100 years
Increased human longevity and aging populations represent key global megatrends of the current age
It's important to differentiate between longevity, life expectancy, lifespan and healthspan
Life expectancy statistics represent an average for an entire population and can be misleading
Anthropologists and demographers are still trying to establish what human lifespans were like in the past
Today, people are much more likely to live to old age
II
Centenarians and supercentenarians are increasing in number, researchers disagree whether lifespans will continue to grow
The global centenarian population is projected to grow eightfold by 2050
There are many myths about the longest living humans, but a scientific organization tracks and verifies supercentenarians
Researchers disagree whether there is a maximum human lifespan
Genetics seems to account for 25% of longevity and becomes especially important at the oldest ages
Blue Zones are areas where centenarians are highly concentrated — they also have common lifestyle characteristics
Your odds of reaching 100 years — lifestyle choices make a difference
III
Aging will have an increasingly large impact on our society
We are witnessing a global demographic transition to aging societies with lower fertility
The aging population presents some major challenges for the large majority of countries
Population aging will require us to redefine how we think about aging and retirement
Population aging should be viewed as an opportunity
Taking action to prepare for aging populations requires some important changes
IV
Improving healthspan is critical for aging societies
Increased longevity has made us more susceptible to chronic disease
Old age is one of the greatest known risk factors for most chronic diseases
Medical costs skyrocket with age, chronic disease is the cause
A longer healthspan means spending more years of life in good health
Healthy Life Expectancy (HALE) is an indicator developed to predict healthspan in a population

The current retirement age was defined at a time when people were not expected to survive much longer. Otto von Bismarck Share this expert 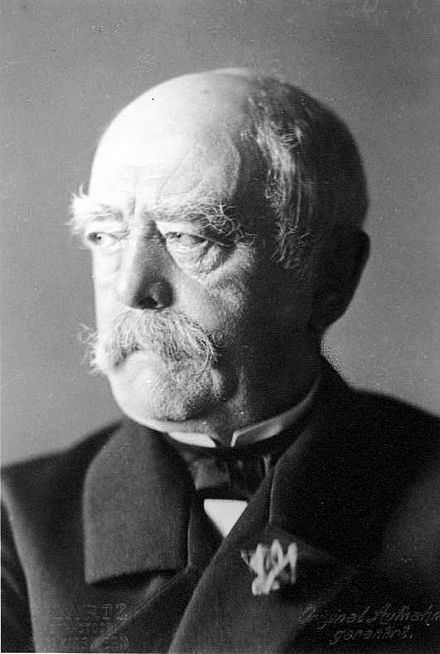 OvB Otto von Bismarck /Otto_von_Bismarck , Chancellor of the German Empire, introduced the concept of social security including retirement and disability benefits to stave off advances by Marxists calling for social reforms. The retirement age was set at 70 when the program was adopted in 1889, it was reduced to 65 in 1916. The choice of retirement age was reported to be pragmatic, in that the social insurance system could be maintained sustainably with relatively moderate contributions.

The fact that retirement age continues to hover around 65 years or so in most countries (for men, retirement age is often significantly lower for women) is somewhat arbitrary and does not reflect the ability of individuals to work beyond this age. Frequently, the psychological signal and the economic incentive for retirement drive people to retire although they may not really want or need to — often leading to a drop in self-worth. Many countries have already begun to increase statutory retirement ages. But a more fundamental shift in how we define retirement is probably necessary.

In an article in The Atlantic , Gregg Easterbrook Share this expert 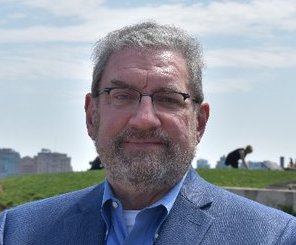 GE Gregg Easterbrook /Gregg_Easterbrook @easterbrookg suggests that retirement shouldn’t be a hard-stop at 65 or 67, after which a person no longer works. He recommends a “retirement track” in which active work continues, but at a progressively slower pace, gradually winding down from full-time to more flexible part-time arrangements.

We inherited a gift of 30 extra years from our ancestors just 100 years ago. What we’ve done is tacitly put them all at the end.
— Laura Carstensen Share this expert LC Laura Carstensen /Laura_L._Carstensen , YouTube

Laura Carstensen Share this expert LC Laura Carstensen /Laura_L._Carstensen argues for a different approach, which she calls stretching out life. In a talk at Stanford University she argued that people should stretch out earlier life stages, for example delaying the start of a career to devote more time to young children. 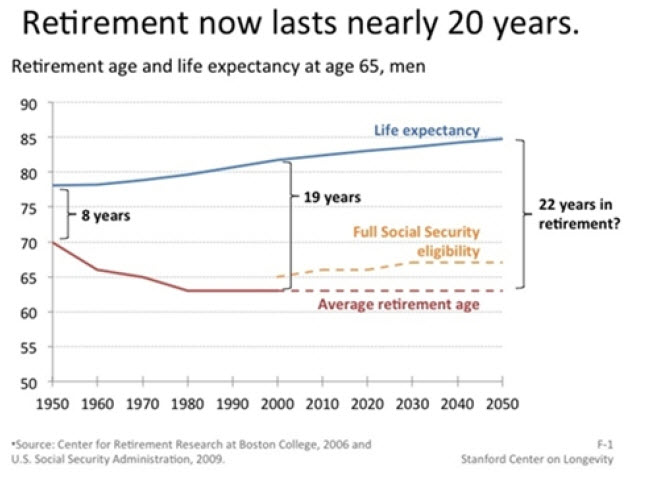