How it works
Nutrition Essentials
I
Macronutrients, vitamins and minerals are the building blocks of nutrition
Macronutrients and micronutrients have different functions in the body
Essential nutrients must be obtained from the diet
Macronutrients make up the bulk of the diet, providing the body with energy and raw materials
Vitamins are organic compounds derived from biological organisms like plants and animals
Fat-soluble vitamins are stored in the body, so toxicity is a risk if too much is taken
Water-soluble vitamins must be replenished regularly by the diet
Minerals are inorganic
Minerals are categorized based on the amount humans require per day
II
Fat is an essential part of the human diet
Dietary fat is not the same as body fat
Dietary fat is a macronutrient with important functions in our body
Dietary fats are composed primarily of triglycerides
Dietary fats are a mix of different triglycerides
III
Nutrition science has explored the differences between types of dietary fat
Fatty acids can be differentiated by their length, number of double bonds and saturation levels
The word "omega" in relation to fatty acids refers to the location of the double bonds
The ratio of omega-3 to omega-6 may influence inflammation
The distinction between saturated and unsaturated fat has been emphasized due to the fight against cardiovascular disease
Saturated fat was replaced by vegetable oils and carbohydrates, leading to negative side-effects
IV
Protein builds a healthy body
The body needs protein for growth and maintenance
Protein is a source of essential amino acids
There is a recommended minimum for protein, but consuming more can be beneficial for some people
Some research has indicated that protein might accelerate aging
V
Carbohydrates are the body's most readily available energy source
Carbohydrates provide energy to the body from a wide variety of food sources
Types of carbohydrate can be differentiated by the complexity of their structure
Glucose is a monosaccharide and the primary source of energy for the body
VI
Digestion of carbohydrates leads to increased blood sugar and an insulin response
Carbohydrates that are easily digested increase blood sugar leading to an insulin response
Starch and fiber are polysaccharides with a very different effect on blood glucose
The glycemic index is a tool to select carbohydrates and minimize blood glucose fluctuations
Fructose is not measured by the glycemic index
The Glycemic Load was created to overcome the serving size problem
VII
Sugar consumption is increasing, despite indications that high-doses are toxic and addictive
Sugar developed from a fodder crop to a global commodity
Global sugar supply and consumption have skyrocketed
Fructose was once scarce but is now a large part of human diets
Unlike glucose, fructose must be metabolized in the liver
VIII
Too much sugar has a negative effect on health
Sugar has many negative effects on the body
Sugar can be toxic in high doses
Sugar stimulates the reward system much like other addictive substances
Criticism of sugar is not new
Regulation may be necessary to curb high sugar consumption
Sugar should be restricted to 10% of daily food intake

Chapter 7 Sugar consumption is increasing, despite indications that high-doses are toxic and addictive 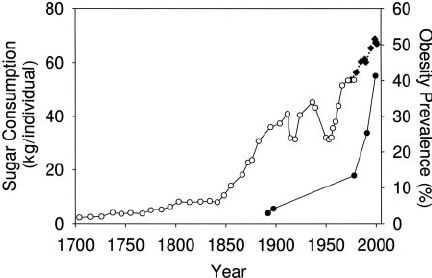 Sugar consumption in Britain and the USA, compared to obesity statistics

A major contributor to continued increases in sugar intake in recent times appears to be sweetened beverages:

In 1977–78 two-thirds of added sugar in the US diet came from food, but today two-thirds comes from beverages.
— Barry Popkin et. al., Nutrition Reviews 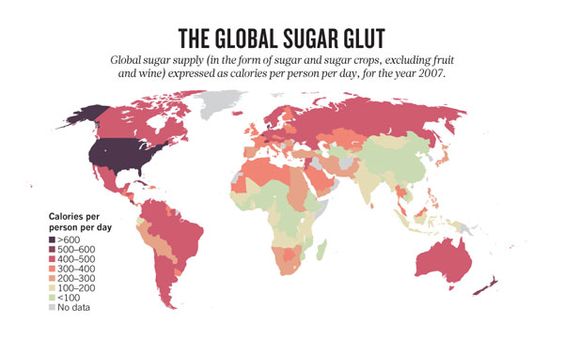 Global sugar supply expressed as calories per person per day

Estimating per capita sugar consumption is problematic , it tends to start from overall sugar supply and then estimate what is eaten versus thrown away. It seems clear, however, that sugar consumption has increased drastically and that rise coincides with the emergence of the obesity epidemic and an increase in diabetes . 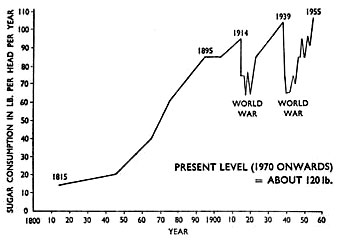