Interleaving is a learning strategy that involves mixing different but related learning tasks rather than learning each one separately. Interleaving is the alternative to blocked practice , which involves grouping together learning tasks of a specific type and focusing entirely on that group before moving on to the next one. Interleaving is common in educational settings. It seems logical to group together certain problem types to develop mastery. For example, when learning mathematics, students might first practice addition, move on to subtraction in a later session, and then multiplication in the next. Interleaving would involve mixing addition, subtraction, and multiplication problems into one practice session.

Learners tend to believe that blocking their practice by grouping similar learning tasks together will yield better results, even when confronted with evidence of the efficacy of interleaving. Blocking creates a strong metacognitive illusion , because learners perceive increased mastery following blocked learning. Interleaving is a desirable difficulty . The learner must repeatedly switch between tasks. It may initially take longer to achieve the same level of mastery. But the introduction of this difficulty reliably produces better long-term results provided that the learner has a strong enough initial grasp of the task. Learning scientists suggest that blocking may be ideal for initial learning, but that interleaving should be used in subsequent learning sessions to improve performance. 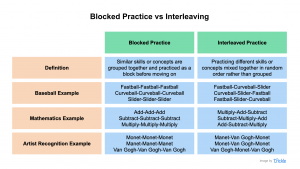 Interleaving has been shown to improve performance in many areas , including both motor skills and cognitive tasks. Research has found interleaving to be effective in badminton , basketball, baseball, bean bag throwing , learning mathematics , discriminating between paintings by different artists, identifying birds , interpreting of electrocardiograms, assessing complex legal scenarios.

Researchers have attempted to identify what causes the benefits of interleaving:

Interleaving is a better simulation of the environments in which learners will later need to perform. In competitive sports, athletes will rarely need to perform in a blocked fashion. Instead, they will need to quickly assess the situation and determine the best course of action. Similarly, learners facing a final exam are likely to encounter a mixed set of questions coving different topics. They will need to identify the correct strategy for solving different question types. Interleaving is a more realistic simulation of real-life situations and thus improves learners’ ability to react to the unexpected. 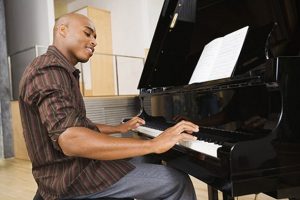