How it works
Sleepless
I
Sleep stigma and modern technology have led to a global sleep epidemic
People are overcoming a culture of short sleep
Human ingenuity created a world that promotes sleep deprivation
Sleep deprivation is considered by some to be a health epidemic
Sleep deprivation has a huge economic and societal cost
Sleep deprivation is a recognized form or torture
II
Sleep deprivation has profound detrimental effects on healthy productive life
Sleep deprivation interferes with healthy and productive life
Sleep deprivation accumulates to a sleep debt
Catching up on sleep after deprivation can help recovery, but the body can't compensate for all the lost sleep
Lab rats die of sleep total deprivation after 2-3 weeks
Fatal Familial Insomnia is a rare disease that leads to death after months of sleep deprivation
III
Lack of sleep impairs mental and physical performance
Humans can go days without sleep, but mental function is impaired
Lack of sleep negatively impacts cognitive and physical performance
Sleep deprivation leads to cognitive impairment
Sleep deprivation leads to reduced vigilance and slower reaction time
Reduced vigilance leads to accidents and disasters
Drowsy driving is as dangerous and potentially fatal as driving drunk
IV
Health & Health Risks
Insufficient sleep is linked to higher risk of disease and higher mortality
Short sleep suppresses the immune system and increases susceptibility to infection
Sleeping too much may be an indicator of an underlying illness or sleep disorder
Short sleep leads to increased appetite and overeating, which contributes to obesity and diabetes
Sleep-deprivation reduces attractiveness and the ability to reproduce
Sleep and mental health are closely related

Alan Rechtschaffen Share this expert AR Allan Rechtschaffen /Allan_Rechtschaffen devised an ingenious, albeit cruel experiment to understand the effects of total sleep deprivation. He put two rats on a disc suspended over water. The rats were separated by a barrier in the middle of the disc. The experimental rat was subjected to more severe sleep deprivation than the other control rat. Whenever the experimental rat fell asleep, the change in the rat’s brain waves was detected, and the disc would begin to rotate. The two rats would awaken and had to move to keep from falling into the water below. The control rat was able to sleep whenever the experimental rat was awake. However, it was still exposed to the stressful situation of frequent waking to avoid a sudden bath.

The experimental rats showed severe effects of sleep deprivation, which the control rats did not. Their fur was disheveled and discolored, and they developed skin lesions. They ate more, thus consumed more energy, but still experienced significant weight loss. The experimental rats lost the ability to regulate their body temperature, and their immune systems began to shut down. 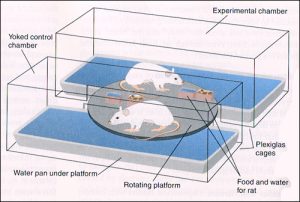 Illustration of the setup of Rechtschaffen's sleep deprivation experiments on rats